June in the Garden

June’s been a wonderfully exciting month at Chez Foti where all my hard work earlier in the year’s started to reward us with a larder full of bountiful produce. Most of my wee little seedlings are growing up into large healthy fruiting plants and the garden has suddenly gone from a desert brown to luscious green. Result! 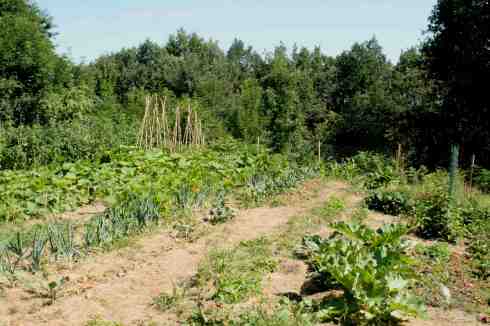 Early in the month I declared war on the weeds and mulched around most of the plants with course grass clippings. On the whole it’s working well though the most persistent weedy warriors have broken free, and there’s still a few areas I haven’t got around to mulching yet.

I’m pleased to report that I’ve finally finished planting my chitted potatoes, just as the first ones I planted back in March have started to be dug up! I also sowed some sweetcorn, lots more basil and a few cauliflowers…the latter being a complete germination failure.

All sixty one of my tomato plants are fairing well (yes 61, 54 planted ones are 7 self seeders) and most are fruiting, yikes that’s a whole lotta tomatoes coming our way very soon! I really must crack on and research buying a chest freezer in France. 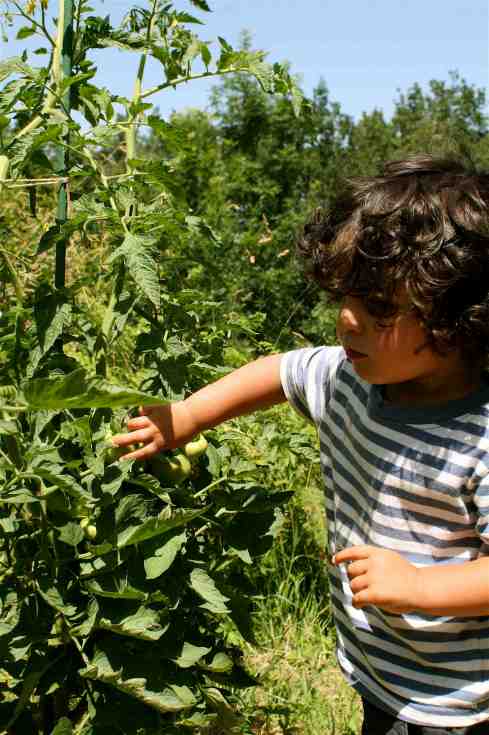 The Borlotti Beans have been caned (using bamboo cut from the garden) which has made the garden look like a proper veg patch now! And they’re starting to form gorgeous red and green pods. 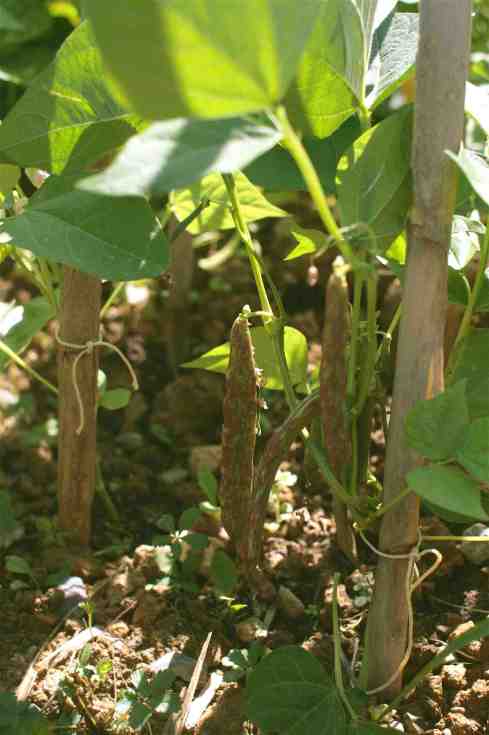 I’m delighted to report that my overwintered garlic has been a huge success. I pulled it up a couple of weeks ago and was quite taken aback at the size of the bulbs…and the flavour’s pretty good too.

Pretty chuffed with my Garlic!

Finally the globe artichoke plants are taking off and moving on from the teeny weeny seedlings that they seemed to be stuck at for months: 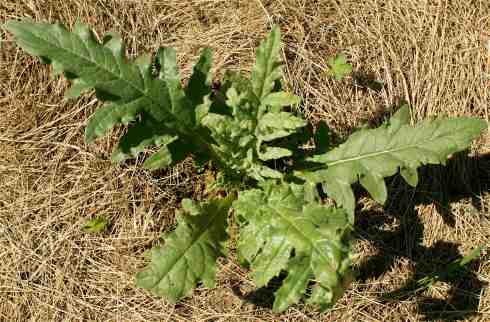 The squash and pumpkin plants have grown absorbitantly and seem to be taking over most of the patch again:

After a slow start the pepper and chilli plants are also looking a success, with the first of the chilli’s forming, yay!

The first chillies of the Year

Another recent success are the rhubarb plants which I took for dead a few weeks ago, it looks like we’ll be eating rhubarb very soon. 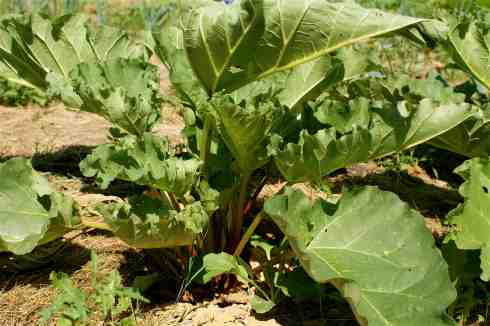 The disasters of the month have been my cauliflowers, cabbages, calabrise and PS Broccoli…all sown several times now but have suffered the double blow of very low germination levels and too much hot sun that’s withered the survivor seedlings. I’ve recently re-sown most of them again but covered the areas in bracken to retain moisture and protect from the strong sun, fingers crossed. We’ve also had a new problem with enemy Mr Mole who’s taken to digging up several new plants and seedlings.

The shallots are all ready for the eating, as are a few of the red onions. The potatoes have now started, both new and old. We’re also happily tucking into courgettes and cucumbers a plenty as well as the continuing pick and come again lettuces and salad leaves. We have a few french beans starting (the first got used last night in a lovely Salade Nicoise). Plus the spinach and my Veg of the Month, Swiss Chard. Together with the strawberries we now have a few luscious raspberries which the kids are loving. Other than the odd red pepper I’ve barely been buying any fruit or veggies and making do with what we’ve got. Together with our wonderful eggs we’ve been having quite a number of freebie dinners now, which makes it all so worthwhile!. 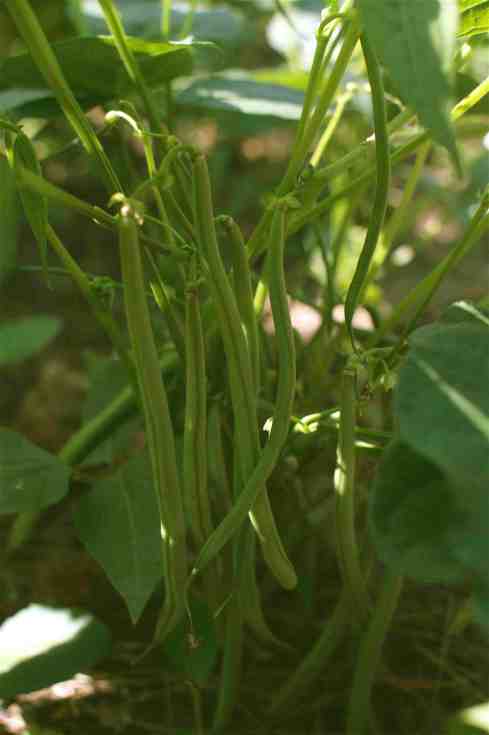 The first of the French Beans 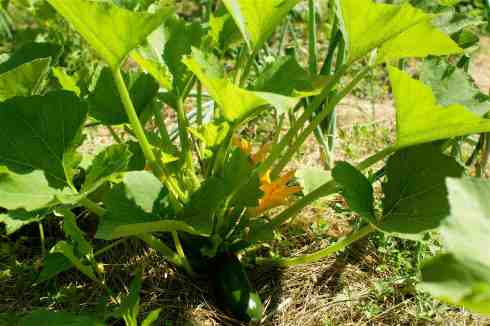 Bring on the Courgettes! 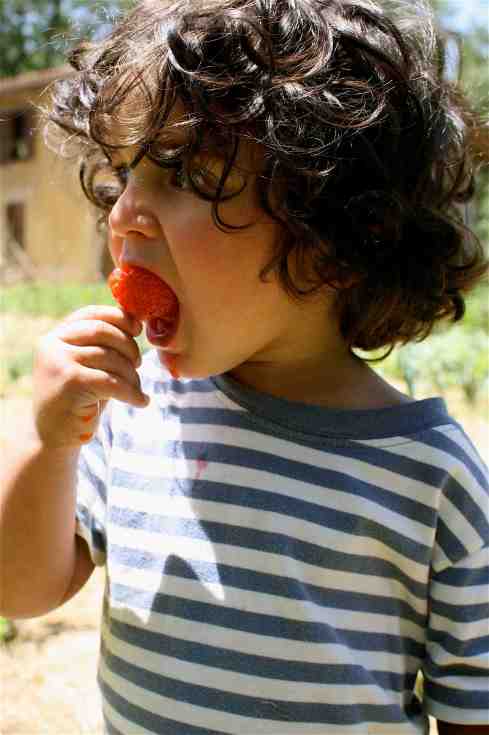 All the ingredients for tuna nicoise (well minus any toms, tuna, olive oil and vinegar anyways!)

So that’s it folks for this month, I’m sure we’ll be tucking into a good deal more by the end of another month,

As my veggie patch, or potager as they’re known here in France, is coming into its full glorified bloom and all my hard work’s paying off with a freebie larder of veritable goodies, I’ve decided to start something new on the blog, A Veg of the Month round up. Each month I’ll be choosing my most prolific in season veggie and blogging all the ways I’ve used and cooked with it, and asking readers to contribute their own recipes and ideas. This month I’ve chosen the humble yet magnificent Swiss Chard, not the most obvious choice for a June veggie I know, but along with the more popular spinach it’s been one of the first abundant veggie’s of the season at Chez Foti.

It’s a fabulously easy veg to grow, readily germinates, takes up relatively little space, seems to require little or no additional watering, grows quickly and profusely with individual plants lasting up to a staggering 18 months (and mine have) and is pretty darned hardy to boot!

Interestingly it’s been a veggie generally unknown to most folk, myself included, apart from the allotmenteers and grow their owners, until the recent advent in popularity of the organic veg box schemes. Being such an easy crop to grow it’s no wonder it’s became a regular feature of the boxes. Chard is also a particularly heathy green leafy veg having high levels of vitamins A, K and C, and rich in minerals, dietary fibre and protein.

Freshly picked chard and the first potatoes of the year

Not only is it my wonder veg to grow it’s fabulously versatile in the kitchen too, and can be used a lot like spinach. The leaves can be picked young and small and eaten whole and raw in salads (which admittedly I have yet to do, as they seem to grow so quickly here!). Or they can be left to mature and the leaves separated from the stems. The stems are a little like celery and require slicing and cooking for a few minutes longer than the green leaves which are pretty much the same as spinach (though with a wee bit more oomph in the flavour department).

As a veggie side chard is great sautéed for a few brief minutes in garlic and plenty of olive oil, adding a wee squeeze of lemon and a generous pinch of salt and black pepper at the end. Throwing in a tinned anchovy or two with the garlic and/or a finely sliced chilli works a treat; chard takes particularly well to strong salty flavours.

Last week I made a delightful Chard & Broad Bean risotto (using my recipe for Lemon, Pea & Asparagus Risotto but switching the veggies). Earlier in the month I made Ewan Mitchell’s Pasta with Chard which provided us a very tasty mid-week supper in minutes.

And I spiced it up in a wonderful Chochori, a Chard and Potato Curry courtesy of Nisha Katona’s Curry in a Hurry video. I’ve also added it shredded (at the last minute) to Frugal Feeding’s fabulously aromatic Slow Cooked Beef Curry and my own Prawn Thai Green Curry (recipe to follow).

I’ve been adding Chard a plenty to my Chicken, Egg and Veggie Fried Rice or more often than not ditching the meat for a vegetarian freebie alternative (which the kids adore equally), throwing bundles of it into Pork & Noodle Stir Fries (and again various meat free versions), Kids Bolognese and Super-Vegged up Chillies. It’s also been a welcome green in many a soup, including my Cream of Veggie Souper Soup and Caldo Verde (Portuguese Greens Soup) and blitzed into a super nutritious Kids 5-a-day Pasta Sauce.

So that’s it for my first ever Veg of the Month Round-Up. Feel free to join me in my celebration of the Chard Wonder Veg with your comments, ideas or recipes! I think we’ll be having chard in surplus supply for a good while yet so I’m looking forward to trying out some new ideas.

Leave a comment   |  tags: Chard, Swiss Chard | posted in The Potager, Veg of the Month