November in the Garden…..

November has been a bit of a sad month in the garden.  Lots of ends and not so much new growth.  Most of the ‘summer’ veggies have now given up and succumbed to the cold, the last of the courgettes, french beans and sweetcorn have been picked and eaten. I still have the odd pepper, chilli and aubergine hanging on out there, but they’re very small and a little on the pathetic side. Jacques kindly picked the last of the red chilis for me last week, and scarpered off with them to get a sneaky chomp (lucky for him they’re mild as mild can be!): 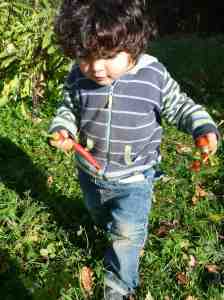 Jacques scarpering with a couple of chilis! 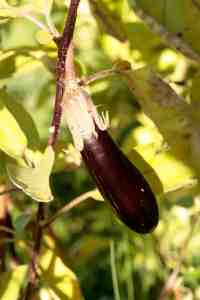 One of my last wee aubergines

The annual herbs are starting to die back now too, and I still haven’t stripped the basil to make oodles of pesto as I’ve been meaning to for weeks now.

On the positive side we still have a few precious carrots left, and the couple of rows of babies I sowed about two months ago are getting bigger by the day, though I doubt they’ll be ready for eating until well into the new year. Carrots I’ve realised are incredible slow growing, especially in the colder months.  I really must try to succession sow them better next year so we have a more constant supply all year round. 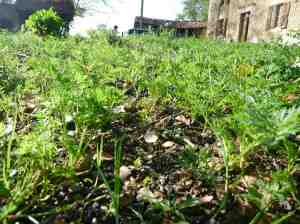 We’re also still eating lots of lovely swiss chard. Swiss chard is a fairly new veg to me and I love it.  So easy to grow and apparently particularly hardy, lasting a good 18 months or so out here if you’re lucky. You just keep picking the leaves and they magically grow back again.  And so great to cook with too, very versatile, and a lot like spinach but a little more robust. I use it regularly in soups, casseroles, stir fries and curries. 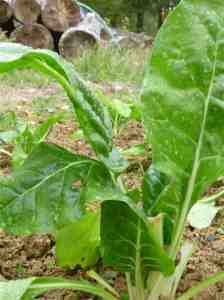 My broccoli’s still going great guns too, which is lucky as it’s the kids fave veggie!  It’s so much tastier and sweeter than anything commercially grown. 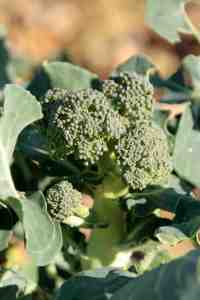 The beetroot, sowed about two months ago, is now baby beetroot and ready to start eating, though I’m going to leave most of it to grow to full size. And it’s lovely, so so sweet. I’m very impressed at how easy and quick growing it is. Fabulous roasted (have you tried my Roasted Veggies with Couscous & Feta recipe?) or used in salads…watch out for my baby beetroot and goats cheese salad recipe coming soon!. I’ve also recently discovered that the beetroot ‘greens’ can be used just as spinach and are very tasty indeed. 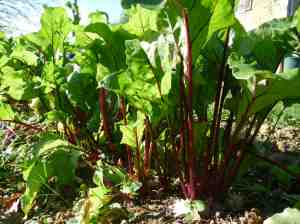 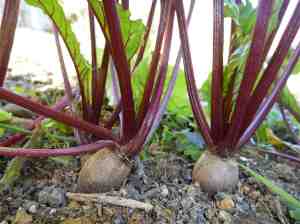 Last but not least that’s ready to eat at the mo are celery and the odd lettuce.  The former’s a bit disappointingly scraggy, but nevertheless great to use in soups and casseroles.  Lettuces a tad on the small side, but still useable. My rocket finished a couple of weeks ago.

At the beginning of the month I sowed some garlic, broad beans and cauliflower seeds: 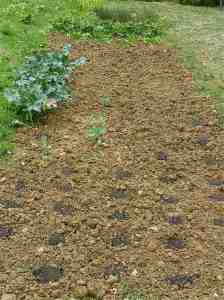 And I’m pleased to say that the garlic has all come through, it should be ready for harvesting early next summer.  My first attempt at growing garlic this year was pretty successful, it didn’t exactly look perfect but tasted great and was really really strong, we’re still using it now. The broad bean shoots have also majestically appeared, they should be grown up and ready for the pot in the Spring. The cauliflowers haven’t showed yet, I think I sowed them too late in ground that was too cold. The savoy cabbages that I sowed some time early October are still very very small, I’m not sure if they’ll make it into old age to be eaten….I think they went in way too late too….eh well. 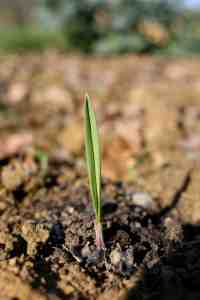 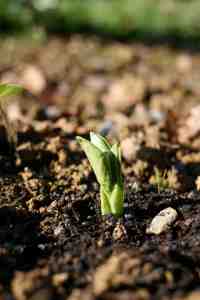 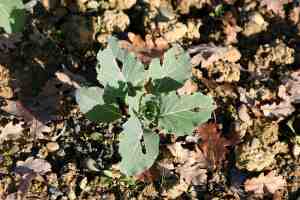 I had been fully intending to grow lots of veg to be eaten over the winter, but somehow or other managed to miss the summer time slot for sowing all the winter roots, cabbages and greens. But it was an extremely hectic and fun summer!

Unfortunately with less to harvest we’ve seen a big increase in our food bills again.  After an amazing summer of barely buying a salad or veg since June, we’re suddenly faced with a relatively bare garden. Next year with better planning and know how I’m hoping we’ll be in a very different situation. This year has been my first attempt at veggie growing, actually it’s been my first attempt at growing anything living at all (apart from two babies!), so all in all it’s been pretty successful. But with lots and lots of valuable lessons learned for next year.

Well that’s it for the November round up! Hope you’ve enjoyed it.

October in the garden…..

October is all about the pumpkin and squash, and there’s been lots of them!  These are the last of the harvest I picked this morning as there’s a threat of frost tonight.  Whilst initially cursing planting so many, mainly because they took up so much precious space with their wild and abandoned growth, I am indeed a very happy lady now with my more than substantial  harvest.  We’ve been eating the delicious squash, in all their various and strange shapes and sizes, all summer, and now it’s time for the majestic pumpkin to take the glory.  I have to say I had no idea squash and pumpkins could taste this good until I tried our homegrown Chez Foti ones, other than the ever so popular and tasty Butternut anyway.
Needless to say squash or pumpkin are appearing every day in our food in one form or another.  There’s nearly always pumpkin soup on the offering, and it’s a tasty sweet addition to nearly all my curries, stews and casseroles, pasta sauces, stir frys and risottos.  I’ve even made some rather yummie squash muffins!  Rest assured they’ll be lots more squash and pumpkin recipes in the next few weeks!
Most of my summer crops are still amazingly holding strong in the garden.  I’m still picking the french beans daily, and regularly have peppers, chillis (albeit disappointingly mild ones), aubergines, sweetcorn, broccoli, courgettes and carrots.  I thought my courgettes had finally given up for the year, until I found six a couple of days ago, plus lots of flowers and babies!  The celery’s also now finally ready for the picking, so I’m  looking forward to using it in lots of soups and stews.
My second harvest of sweetcorn has just began, I planted these about Mid July and they’re utterly delicious, and so so easy to grow.  I can honestly say it’s the best sweetcorn I’ve ever eaten, but then that’s probably because there’s usually less than fifteen minutes between picking and cooking! 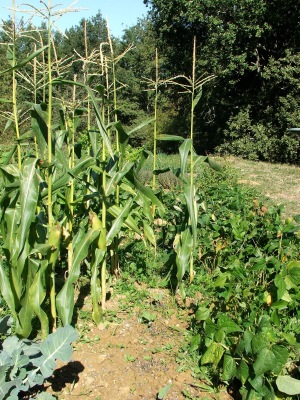 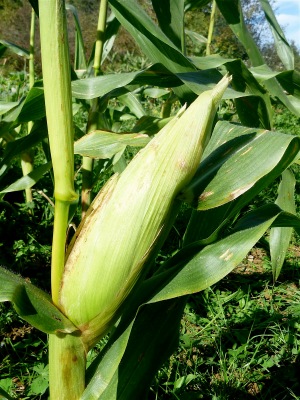 We’re also eating some lovely rocket, that I sowed earlier in the month.  Much faster at growing and somehow much tastier than earlier crops I tried in the Spring.
The potatoes have all finally been dug up and stored for the winter, though unfortunately I don’t think we’ll have enough to see us through.  I grew various new potatoes earlier in the year, but these are the Desiree maincrop ones.  They make great roasties, mash and chips, which pretty much covers our potato consumption! 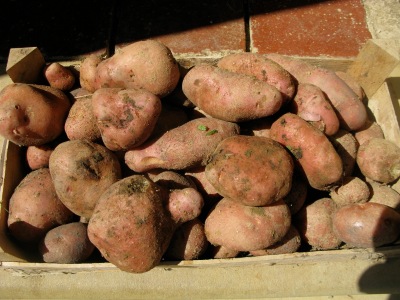 The apples and pears have all been picked; the apples stored in boxes and pears cooked and frozen for later use in pies, sauces and crumbles.  I’ve also been busy collecting some of the many squillions of chestnuts we have, but as yet have failed to do too much with them.  Shelling chestnuts appears to be a very time consuming and tedious exercise!

This month I’ve planted a few more lettuce though I’m not sure they’ll make it through the inevitable frosts, but thought I’d give them a go anyway.  More carrots have also sowed (probably rather late too, but so far doing very well), as have beetroot, winter cabbages and Swiss Chard.  The latter has shot up and is already being picked and eaten (it can be used much like spinach, but is a much hardier and easier crop to grow).
The herbs are all still doing marvellously, though I have a huge abundance of basil that I really must busy myself to making into pesto very soon.   I’ve made it several times before and is soooooooooo good compared to anything you can buy.  I’ll put the recipe on here shortly.
Well that’s all my garden news for this month.  Next job is to get busy sowing more over wintering crops, which is another big learning curve for me!
Hope you enjoyed the garden catch up,
Lou x 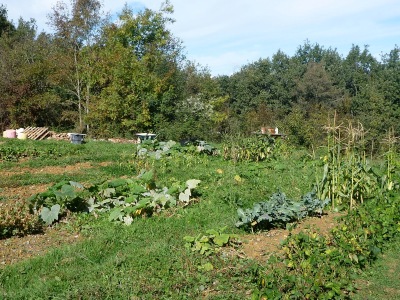