A Super-Healthy Carrot, Pineapple and Coconut Oil Cake dedicated to Jacques and his Grandpa 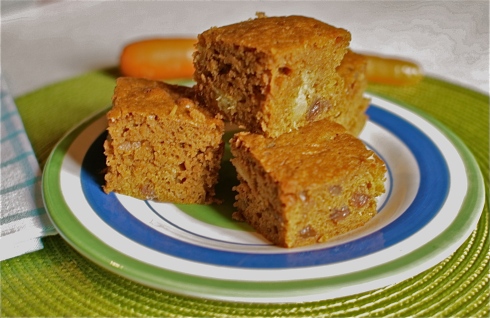 Numerous events have occurred lately that have made me take stock and have a serious think about mine and my family’s diet. Two of which I’m going to tell you about today, hopefully without boring you too much! Firstly there’s Jacques. The boy with a terrible phlegmy night-time cough that he’s had all too regularly from the tender age of 8 months, keeping us awake for many an hour and many a night, sometimes for several months at a time. Numerous trips to the doctors when he was younger confirmed nothing. Then a few weeks ago, at a particularly sleep deprived time around his 3rd birthday we started to do lots of reading around the issue, and to my surprise discovered the cough may be down to a cow’s milk allergy. I have to confess to being a little sceptical as allergies, fortunately, don’t run in either of our families. But I thought I’d give it a go, immediately cutting out all cows milk, yogurts and cheeses. And do you know what, the cough dramatically stopped that very first night! Bearing in mind he’d been coughing every night for at least an hour for the previous few weeks this was a bit of a breakthrough. To say the least.

And since then I’ve on the whole been sticking to it, not regimentally as he obviously doesn’t have a severe allergy, but definitely making sure there’s no (cow’s) dairy in the late afternoons and evenings. And for a boy that adores his after-dinner yogurts (clearly where the problem lay!) this meant switching to sheep’s milk ones instead, which interestingly happen to be far tastier and handily readily available in yogurt-loving France. Luckily he’s never been a milk fan. And he’s barely coughed since. How wonderful is that?!. The (somewhat bitter) downside of his better nights of sleep are the ever-earlier wake ups, but that’s another story! 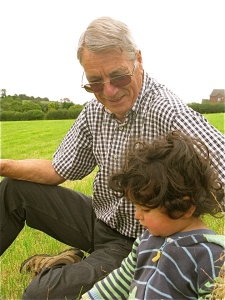 Jacques with his beloved Grandpa

Now the second event was a chance viewing of ITV’s DayBreak show (actually a friend called me up to watch it) and an interview with a young chappie, Kal Parmar, who claimed his father’s Alzheimer’s had dramatically reversed as a result of taking a regular dose of Coconut Oil. Following the show I turned to google and found quite a few people in the States were making similar claims. And Kal, being a budding film maker, is making a film about his dad, which I’ll be most excited to see. My own father has Alzheimer’s and was diagnosed a year and a half ago. So naturally he’s on strict instructions to take his Coconut Oil! And Coconut Oil being the wonder fat and food that it is, it strikes me he’s absolutely nothing to lose and everything to gain.

But more on the wonders of Coconut Oil in a later blog (of which I have quite a few baked and planned!), but for now I’ll crack on with today’s recipe. A very low-sugar, low-fat, cow’s milk-free and pretty darned healthy Carrot & Pineapple Traybake Cake in honour of both Jacques and my dear Dad, who happen to share a very special bond. It uses Coconut Oil and Yogurt (Sheep’s in my case) in replacement of the usually large measure of Sunflower Oil, which make the cake a good deal healthier as well as being exceptionally moist. Despite it’s healthy line-up of ingredients this cake is impressively high in the taste stakes and we all loved it. And I know my Dad will too, nudge nudge Mum….

If you can’t source or don’t want to use coconut oil, just replace with sunflower. And if you want to naughty things up somewhat this would be sublime with a cream cheese frosting… 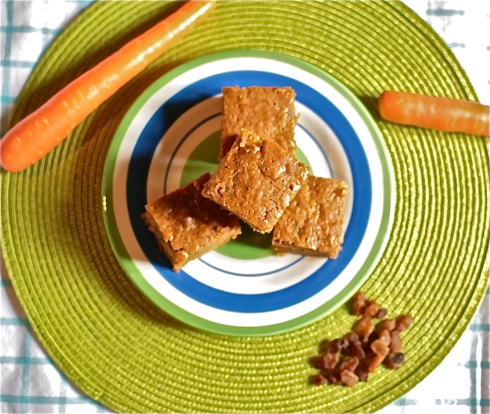 a heaped teaspoon of Baking Powder

½ a teaspoon of Bicarbonate of Soda

zest of an Orange

zest of a Lemon

Sift together the flour, cinnamon, baking powder and bicarb into a large mixing bowl. Stir in the sugar. 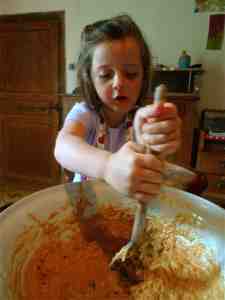 In another bowl lightly beat the eggs with a whisk, then whisk in the  yogurt, coconut oil and orange and lemon zest. Employ a whisker and a stirrer (i.e. small child) if you have one.

Pour the egg and yogurt mix into the flour and sugar and stir well with a wooden spoon. Then mix in the carrots and sultanas. Cut the pineapple pieces into small chunks and stir these in too.

Scrape the cake mix into the lined tin.

Bake in the pre-heated oven for 50 minutes or until a skewer comes out clean.

Turn out of the tin and allow to cool a little on a cooling rack. It’s truly wonderful eaten fresh out-of-the-oven-warm. With a cuppa for the grown up folk. 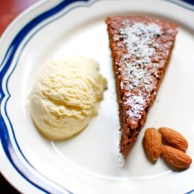 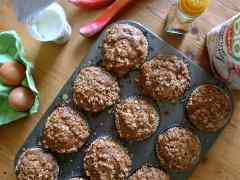 12 responses to “A Super-Healthy Carrot, Pineapple and Coconut Oil Cake dedicated to Jacques and his Grandpa”