October in the Garden

Once again another late round-up!. October’s been a very busy month for harvesting but not much else. With the exception of the brassicas it has to be said the patch is looking rather sorry for itself these days. There’s been a lot of ends and not too many beginnings.

The tommies have finally ALL been harvested. After all the hard work they gave me over the summer I was on the whole pleased to see an end, but also just a little bit sad. I stripped all the plants just before the first frosts at the end of the month, collecting a few final baskets to work on. I managing to make some lovely bottles of Homemade Tomato Ketchup, my 3rd batch of The Garden of Eating’s Tomato & Chilli Jam  and with all the leftover green tommies quite a number of jars of Green Tomato Chutney.

The borlotties have also finished (the last remaining fresh ones have been made into a fab Borlotti, Chicken & Pumpkin Stew that I shall be blogging shortly, the earlier dried ones I’m saving for colder veggie-less days), as have the french beans (though there’s countless bags in the freezer) and calabrese.  The basil died at the first frosts, just before I had time to pick and make batches of pesto, damn!. Luckily all the other herbs are boldly braving the harsh weather we’re suddenly having. The aubergines have pretty much stopped and the last have been made into Parmigiana (recipe also soon, I’m so behind!) and a lovely Comforting Moussaka thanks to a recipe from Rachel of the Well Worn Whisk blog. There’s also a few stray peppers and chillies but they’re not going to hold out much longer.

The last of our Aubergines

I collected up the last of our pumpkins and squash at the end of the month, as you can see there’s quite an assortment and a good deal of ripening required! The greenies are now languishing in our warm lounge hoping to turn a little more orange. Luckily I still have a hefty supply of fully ripe beasts that should see us through the winter with Pumpkin Soups!. Incidentally I’m carrying on my October Pumpkin Veg of the Month into November as I’m so behind on blogging all my pumpkiny recipes.

The last of our Pumpkins & Squash

As I said the brassicas are fairing pretty well, though somehow have become a bit of jumble. Another mix up with the seedlings. Ahem. We may just have a few brussel sprouts soon (though they didn’t fare well in the summer heat) and the cabbages are ready for picking. It’s also looking like the little bit of Purple Sprouting Broccoli that took may be coming good soon too. Fingers crossed, it’s one of my favourite veggies. 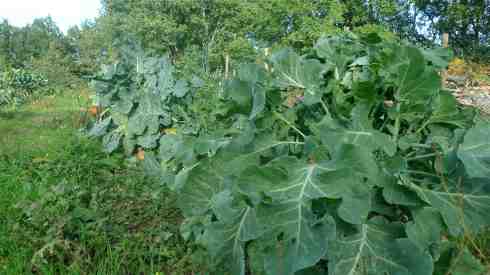 The Brassicas, the only bit of healthy green on the plot!

As for the wild fruit that’s all sadly now finished now that we’ve come into the colds of November, but was pretty prolific in October. We had greengages or mirabelles galore (I’m still not too convinced as to what exactly they were since everyone had a differing opinion, other than delicious of course and now Jam). Plus a huge abundance of pears, a few apples, blackberries, slows and elderberries and figs a plenty picked from neighbouring land. Most of which went into chutney, including my own Hedgerow Chutney.  And the figs have been wonderful in The Garden Deli’s Fig Jam.

Now that’s about it for the October round-up.  I really must get out there and plant some more spinach and my over-wintering broad beans and garlic. It’s been a long while since anything new’s been sowed and as usual I’m falling way behind. C’est la vie! 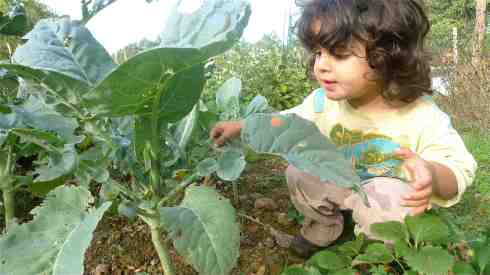 Jacques caterpillar watching on my Cauliflower (I think!) plants, like most little boys he loves his bugs

This entry was posted on Tuesday, November 13th, 2012 at 2:25 pm and tagged with Garden Update and posted in Garden Updates. You can follow any responses to this entry through the RSS 2.0 feed.
« The Cooker!
Roasted Wild Mushroom Pizza »

18 responses to “October in the Garden”