August and September in the Garden

Time’s been rather short over the last few weeks and somehow or other I didn’t get around to an August garden update and indeed now I’m more than a tad late for Septembers!. So here goes for the last couple of months and a bit….

To tell you the truth it’s a bit of a jungle out there and I’m rather ashamed of the patch right now. As I said it’s been a very busy few weeks for me of school holidays, holidays to the UK, rentree back to school and the patch has unfortunately had to suffer with zero time for weeding, tidying, sowing or planting. There has however been a fair degree of harvesting with all my spare time energies being channelled into picking, cooking, preserving and freezing.  Incase you missed it, here’s my Tomato Veg of the Month Round Up of recipes, and I really have been picking an enormous basket of tommies each and every day since the end of July!. And although they’re finally starting to slow down and die off there’s still a ridiculous amount out there.

Other than the tommies we’ve also been enjoying a glut of peppers and aubergines (and there’s happily been Ratatouille a plenty all summer, and lately another veggie favourite of mine Aubergine Parmigiana‘s – blog coming soon!). 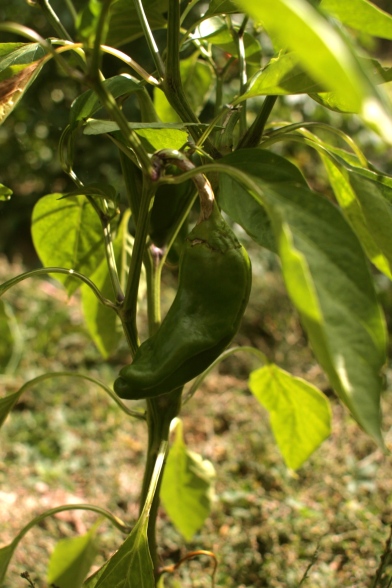 Other stuff that’s fairing well despite the neglect are the chilies, I’ve only three plants this year but they’re constantly laden (and pleasingly firey!), I’ve several bags full in the freezer plus a few hanging around drying out. After a slow start the squash and pumpkins are all going great guns and I’ve started to pick a few butternutsfor risottos, pies and soups. I’ll be harvesting them all soon as we can’t be too far off the first frosts.

I’ve even pulled a few parsnips of late and they’re surprisingly sweet (and large!), a tad better than my disappointingly miniscule carrots anyway. 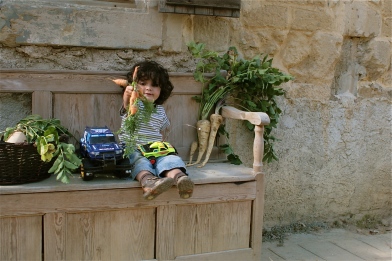 Jacques playing with his trucks and carrots!

The goodies that have sadly finished since my last round up include the sweetcorn (now that was fantastic, so super sweet), cucumbers and unbelievably the courgettes (we’ve only one marrow left!). And the gorgeously sweet melons have been and gone too.

It’s quite a list when written like this! Cabbages and sprouts soon. And I’ve not even mentioned the pears, greengages, apples & blackberries around the garden. 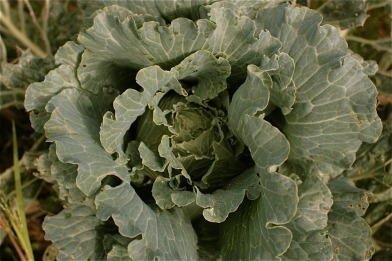 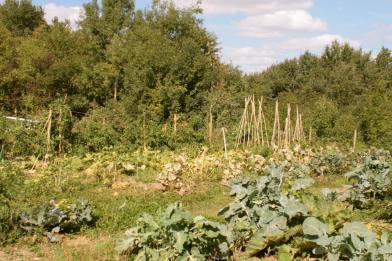 My desperately overgrown ‘jungle’ of a potager!

This entry was posted on Wednesday, October 10th, 2012 at 10:12 am and posted in Garden Updates. You can follow any responses to this entry through the RSS 2.0 feed.
« My Girly Fairy Cake Heaven!
Cinnamon & Greengage or Plum Jam »

7 responses to “August and September in the Garden”