We’re just over the middle of the loooooonnnnng 10 week, yes TEN week summer school holidays here. France reportedly has more school holidays than anywhere else in the world, a great place to be if you’re a teacher. Actually I moan a lot about them but in truth I’m quite enjoying it really, well this holiday anyway. The first half we had lots of visitors which is always fun, and now we haven’t but I’m just enjoying being lazy and not having to get dressed and washed and breakfasted (well eventually we do!) and do the school run (not that it’s terribly stressful round here, 5 kms in about 6 mins, and it’s rare you ever see another car until you get to the actual school and there’s never any hassle parking). This holiday it’s lots of walks around the garden, fruit picking, marathon trampoline and paddling pool sessions, visits to local parks and the odd lake or swimming pool dip. Plus plenty of baking. I’m not going to mention the squabbling, squealing, screaming or sulking. Really I’m not. Ahhhrrrrr.

My daughter’s now nearly four and loves to bake (she’s been at school since she was just over two by the way, they start them young here!). Strangely though she’s not really a big cake fan (we really should have a DNA test done) but does love to eat anything she’s helped make. And Jacques at just over two has now decided he wants a piece of the baking action and is very much my master stirrer. He likes his cake but also has a partiality for savory. So during these long summer jollidays we’ve had many a baking session. Many way too messy to blog and show, but some just about okish!. Today it was the turn of some really-fruity fairly-healthy mini-muffins made with bananas, apricots and sultanas. I like to make my muffins small for the kids (and for me so I can eat twice as many) and tend to make them in the normal fairy cake sized cases and tins, but feel free to make them a normal muffin size too.

a large pinch of cinnamon

75ml of creme fraiche (half fat works fine) or yogurt

80g of apricots, chopped (the slightly squishy ‘ready to eat’ ones are best, but dried work too)

Sieve the flour, baking powder and cinnamon into a largish mixing bowl then stir in the sugar.

In a separate bowl whisk together the eggs, oil and creme fraiche or yogurt. And in another bowl roughly mash up the bananas with the back of a fork.

Now for some serious stirring action. Throw the wet mixture into the dry along with the mashed bananas, chopped apricots and sultanas. Stir until well combined.

Bake in the oven for about 20 minutes until a little golden on the top, firm to touch and an inserted cake skewer or fork comes out crumb free.

Remove from the trays and cool on a cooling rack for as long as your little ones will allow. Go gobble. 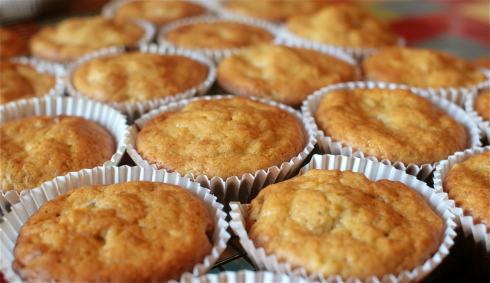 The new Naked Chef, admittedly it was 38°C and we were baking!

This entry was posted on Friday, August 10th, 2012 at 9:32 pm and tagged with Apricots, Banana, Birthdays, cake, Dried Fruit, Muffins, Sultanas and posted in Baking with Kids, Cakes & Biscuits, Finger Foods, Party Food, Toddlers & Pre-schoolers. You can follow any responses to this entry through the RSS 2.0 feed.
« Tagliatelle with Cherry Tomatoes & Mascarpone
A Glut of Tomatoes Pasta Sauces! »