Back on with the courgette season and yep, you did read Courgette Cake, and of the sweet variety too!. Just think of an extraordinarily moist carrot cake with green flecks (and no carrots). Filled with super zingily zesty lemon curd and topped with lemon cream cheese frosting. Yuuuuuummmm. It is.

I first made a courgette cake last summer at a time when my husband was threatening to leave me if I cooked another courgette. Seven plants we realised were way too many for a family of four, especially when two of them are tiddlers and one of the grown ups isn’t a big fan. Which is precisely why I’ve come to have nine, yes NINE plants this year. It was an accident, there were supposed to be four but it seems there was a little mix up on the seed front. And now I fear the summer may end in divorce. Which is precisely why we’re back on the courgette cakes; ’tis Mr F’s preferred usage of a courgette. It’s also one of the few cakes that don’t burn their bum in my awful oven. And only my second blogged cake. Whilst recently adding a Recipe Index to the blog it came to my attention I only had one entry under Cake (Jacques’ Chocolate Birthday Cake), which is obviously wrong on many levels.. Considering I actually do make cakes pretty often at Chez Foti I’ll now be making a concerted effort to blog, and eat, a few more!.

I’d love to take credit for the recipe but sadly I can’t, but Nigella can. It’s from her How to be a Domestic Goddess book. Albeit I switched the lime curd for lemon as we’d recently been given some gorgeous lemons picked from a tree in Spain and they needed using up. My recipe for lemon curd is at the bottom of the blog.

60g of raisins or sultanas

½ a teaspoon of bicarbonate of soda

½ a teaspoon of baking powder

2 to 3 tablespoons of lemon curd, homemade (my recipe’s below) or shop bought

juice of ½ a lemon

Plump up the sultanas or raisins in a small bowl of warm water for a few minutes.

Grate the courgettes coarsely and place in a sieve over the sink or another bowl to drain out the excess moisture.

Place the eggs, oil and sugar in a large mixing bowl and beat together until creamy. Sieve in the flour, bicarbonate of soda and baking powder. Continue to beat until well incorporated. Stir in the courgette and drained sultanas/raisins.

Divide the cake mixture between the two tins. Bake in the preheated oven for 30 minutes until firm to the touch and slightly browned. Remove from the oven and allow to cool in the tins for a few tins before turning out onto cooling racks to cool fully.

Now to assemble the cake. Place one cake on your cake stand or plate. Spread over the lemon curd. Sandwich over the other cake. Now spread the frostring over the top of the cake and scatter on the chopped pistachios. 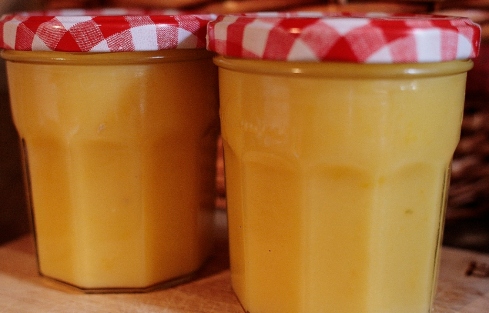 Makes 2 jars of curd, which keep in the fridge for up to 2 weeks

The juice and zest of 4 unwaxed lemons

3 medium eggs plus one yolk, lightly whisked together

Set a large pan of water to boil. When boiling turn down to the gentlest heat possibly and place a heat proof bowl over the top (though the bowl should not be touching the water).

Place the lemon juice and zest, sugar and butter in the bowl and stir every now and again.

Once the butter’s melted whisk in the eggs, continuing to gently whisk almost continuously for about 10 minutes. The curd is ready when it’s considerably thickened and feels heavy on the whisk.

Pour into super clean jars and leave out to cool. Once fully cool, screw on the lids and store in the fridge. 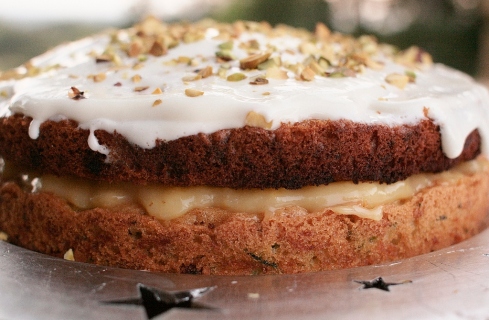 This entry was posted on Saturday, July 28th, 2012 at 4:56 pm and tagged with cake, Courgette, Cream Cheese, Eggs, Lemons, Pistachio and posted in Cakes & Biscuits, Party Food, Puddings & Desserts. You can follow any responses to this entry through the RSS 2.0 feed.
« Thai Green Curry Paste & Curries
70s Flashback Stuffed Marrow »